Londoners enjoy an impressive view of London from the Alexandra Palace.

They can see ‘a havoc’ of new luxury residential towers at the Elephant and Castle in south London seven miles away.

Early 20th Century Londoners flocked to the Elephant and Castle’s music halls, theatres and cinemas. The neighbourhood became known as the ‘Piccadilly of south London’.

Working class Londoners have lived and worked at the Elephant and Castle – and neighbouring Walworth –  for generations. Families lived in council homes built in the decades after World War II, allocated to them at subsidised and genuinely affordable rents.

However, new luxury residential towers such as Strata SE1 and One The Elephant, are turning this working class neighbourhood into a domain for wealthy newcomers and absentee overseas investors – and thousands of council homes, such as at the Heygate and Aylesbury council estates, are being demolished and usurped by new luxury developments.

Southwark Council’s ruling social democrat Labour politicians have eagerly partnered global real estate developers. They say the Council is extracting ‘planning gain’ and financial contributions from developers that can build new council, social rent and ‘affordable’ homes in and around the Elephant and Castle. Hence, Southwark Council brands this policy as ‘regeneration’.

Developers, they say, increase their profits every time they cut a replacement social or ‘affordable’ home from an estate demolition and redevelopment ‘regeneration’ scheme.

This lack of new genuinely affordable homes squeezes local people on average and low incomes out of their neighbourhood. Hence,  many local people condemn this mode of ‘regeneration’ as ‘social cleansing’.

Developers and local political leaders furiously deny in public they are deliberately engaged in ‘social cleansing’.

However, it is visibly irrefutable that this neighbourhood – with its long-established class and race demography, diverse culture and uniquely south London character – is rapidly being diminished by powerful economic interests and political forces.

Hosting several chain stores and banks, the shopping centre is home to dozens of independent shops, cafes and market stalls. The landmark mall has provided a livelihood for working class people of diverse ethnic heritage, including a significant number of people of Latin American origin who settled in the area long ago.

However, Southwark Council’s politicians and senior officers approved in July 2018 a plan by developer Delancey and the University of the Arts London to demolish and redevelop the shopping centre. Mayor of London Sadiq Khan backed this plan in late 2018.

Delancey says it plans to build 979 new luxury homes on a redeveloped shopping centre site. Most apartments will go for sale on London’s overheating property market.

Delancey says 35% of these 979 units will be affordable, with 116 social rented to be managed either by Southwark or by ‘another registered provider’ – and claims these homes will be offered as priority to people living and working in Southwark.

The developer argues these new homes will go up on a site where ‘none currently exist and at a time when the captal’s housing provision is under significant strain’.

However, many local residents, shop-owners and market traders, campaigning against the plan, fear existing Elephant and Castle market traders will not be relocated in any new development, either through deselection or by being priced out by new higher rents.

Local resident campaigners and students at University of the Arts London also oppose Delancey’s scheme on grounds that only 116 of the 979 new homes will be ‘social rented’. They say even that meagre proportion forms only 8.6% of the total residential floorspace and will take ten years to deliver.

Campaigners claim that Delancey misled Southwark Council and could have afforded at least another – 42 social rented homes.

They say the scheme will profit Delancey by a projected £153 million but will ‘destroy and displace the local community’, including many residents and traders of Latin American origin who settled in the Elephant and Castle decades ago.

The plan also jeopardises the future of a very popular and long-established bingo hall regularly used by people of all backgrounds but particularly by elderly people of Caribbean origin.

Campaigners against the scheme are crowd-funding £10,000 to cover the costs of their legal challenge to Delancey’s Southwark-backed scheme. The judicial review is due to be heard in the High Court on 17-18 July.

Campaigners argue Delancey’s scheme is just part of a myriad of luxury residential schemes shredding the cultural and community fabric of this working class part of south London. Corporate players in the global real estate market have spent the first two decades of the 21st Century hyper-commodifying the Elephant and Castle’s public and privately owned land and properties.

The backing of local politicians and senior council officers to demolish council and minimise social housing is crucial to this process and to the progress of developer-driven luxury developments.

This powerful alliance – effectively, a local market state – compels local working people, whose families have lived in the Elephant and in Walworth for generations, to leave the area forever. They can no longer afford to live in the Elephant and Castle and Walworth.

For instance, £1.2 million is the asking price for a two-bedroom ‘Sky Collection’ apartment in developer Brookfield Europe’s Strata SE1 tower. Completed in June 2010, the turbine-topped tower contains no social or council housing.

The lack of social or council housing is poignant given that Strata was built with shared ownership Grant Funding from the Greater London Authority. 25% of the complex’s 408 flats are ‘shared ownership’ – although these are way beyond the means of the majority of local people who continue to lose their council homes in the area through developer-led, council-backed estate demolition ‘regeneration’ schemes.

Householders in shared ownership apartments cannot access the private market apartments on higher floors due to a ‘smart lift’ system.

Southwark Council’s stated policy is that any new development over 10 new homes should provide a minimum of 35% as ‘affordable’. The adopted Policy DM 1 on ‘Affordable Homes’ states at least 70% of this proportion should be for ‘social rent’ and up to 30% as ‘intermediate’, such as ‘shared ownership’.

The remaining 65% can be sold on the open market.

However, Brookfield Europe successfully claimed – through a viability assessment – that Strata SE1 could not profitably provide 35%.

Southwark Council politicians and appointed senior officers settled instead for the developer paying a £1.3m payment to make up the shortfall in social rented and ‘affordable’ homes.

The destruction of the Heygate Estate hinged on one of the most powerful market state ‘regeneration partnerships signed between a developer and a London local authority. Australian-listed developer Lendlease and Southwark politicians, like Peter John and Fiona Colley, combined the power of global real estate capital with the local state to demolish 1,212 council homes on the Heygate Estate.

In place of the Heygate, Lendlease are building 2,924 new homes on the 23-acre site. 1,034 Heygate council tenant households were ‘decanted’ with a promise there would be 500 social homes for families wishing to exercise a much-vaunted ‘right to return’ to the redeveloped estate.

However, ‘right of return’ amounted to a broken promise. The Lendlease/Southwark ‘regeneration’ compelled many council tenants and leaseholders to leave the Elephant and Walworth. Academic research shows they were forced to live elsewhere in the borough or outside of London altogether.

Of 2,924 new homes on the redeveloped Heygate – renamed ‘Elephant Park’ – less than 100 will be offered at social rent. Another 185 and a further 316 units might be offered as ‘affordable rent’ and ‘shared ownership’ respectively – but neither of these tenure types are genuinely affordable to displaced Heygate households.

Shared ownership homes mean a family needs an annual minimum household salary of £57,000. ‘Affordable Rents’ – even if pitched at 50% of the local average market rent – would equate to double the current average £90 per week council rent in Southwark for a one-bed flat.

Rodney Road became the first part of the Heygate to be demolished and ‘regenerated’. Tenants were decanted and never returned to what Lendlease called ‘Trafalgar Place’, a commonplace marketing deceit designed to entice overseas investors. This one specifically suggests central London’s famous Trafalgar Square – nearly three miles away – is just around the corner.

‘Trafalgar Place’ consists of 235 apartments but only eight are said to be offered at social rent (equivalent to a council rent). That’s just 3.4%, some way shy of the 35% minimum Southwark politicians once stated should be the norm for such a development – and a long way from Southwark’s original guarantee to Heygate residents in July 2000 that 100% of the Heygate’s council home would be replaced.

Overall, Lendlease might well provide just 82 ‘social rented homes’, only 2.8% of the overall estate ‘regeneration’. Combined with the promised Affordable Rented and Shared Ownership homes this represents just 20% of the total number of ‘Elephant Park’ homes; a tally that falls way short of Southwark’s stated 35% policy.

The 35% Campaign says Southwark Council will acquiesce in the demolition of over 7,639 council homes as part of ‘regeneration’ schemes across the borough, including around 2,400 homes facing demolition on the Aylesbury Estate just down the road from the Heygate.

This involves a net loss of over 4,424 social rented homes when new such homes are set against the demolition of existing ones.

The net loss of council housing caused by Lendlease/Southwark’s ‘regeneration’ has entered its final phase in early summer 2019. An application has been submitted to build 228 new homes on site next to Heygate Street and the Walworth Road.

The takeover of the 23-acre former Heygate Estate site for its Elephant Park scheme also emboldened Lendlease to persuade Southwark Council’s politicians and officers to agree to One the Elephant.

Local campaigners say the Council’s own tariff should have netted local people £32m. Southwark’s politicians, like Peter John, say local residents will benefit when Lendlease pays the council a share of ‘overage’ profits when the development is completed.

Controversially, none of One the Elephant’s 284 apartments are ‘affordable’. Council officers and politicians seemed persuaded that socially rented accommodation would require a ‘second core’ to ‘provide separate access, including lifts and circulation areas’.

A council planning report says ‘not doing so would have significant implications on the values of the private residential properties’.

In other words, households in social housing would bring down the values of the luxury apartments – and that justifies the exclusion of social housing units. In this sense, One the Elephant is truly a separate development scheme.

None of which seems to bother Southwark leader Peter John who, in 2019, continues to mantra the council is building 11,000 new council homes that will be completed by 2041. However, this programme is already behind schedule. Currently, fewer council homes are being built than lost to estate ‘regeneration’.

Research by the 35% Campaign also shows Southwark’s elected councillors and appointed ‘regeneration’ chiefs gave planning consent to 11,863 new homes in the past ten years. Only 456 (3.8%) of those approved were for social rent.

‘Had Southwark stood firm and forced these schemes to comply with minimum policy requirements then 2,500 social rented homes would have been approved in total,’ says the 35% Campaign.

The council has also sold 1,300 council homes under Right to Buy since 2012 when the government increased discounts for people to buy the publicly-owned homes they rent from the council.

Southwark’s obsession with this type of topdown ‘regeneration’ now also targets the neighbouring Old Kent Road area. ‘The council seems determined to turn the Old Kent Road into a cross between Canary Wharf and Croydon,’ says local resident Jerry Flynn of the 35% Campaign.

Campaigners say ‘regeneration’ that imposes  such change on the Elephant and Castle and the Old Kent Road will diminish these neighbourhoods’ diverse working class populations and rip up their long-established ways of life.

Local people want their existing homes to be refurbished with targeted investment – and they do want regeneration but they want it to be community-led and not developer-driven.

More urgently though, the feeling is that imposed ‘regeneration’ of the Heygate/Aylesbury type only worsens the desperate plight of Southwark’s homeless – especially of the parents struggling to raise some 2,000 children cramped in temporary accommodation. 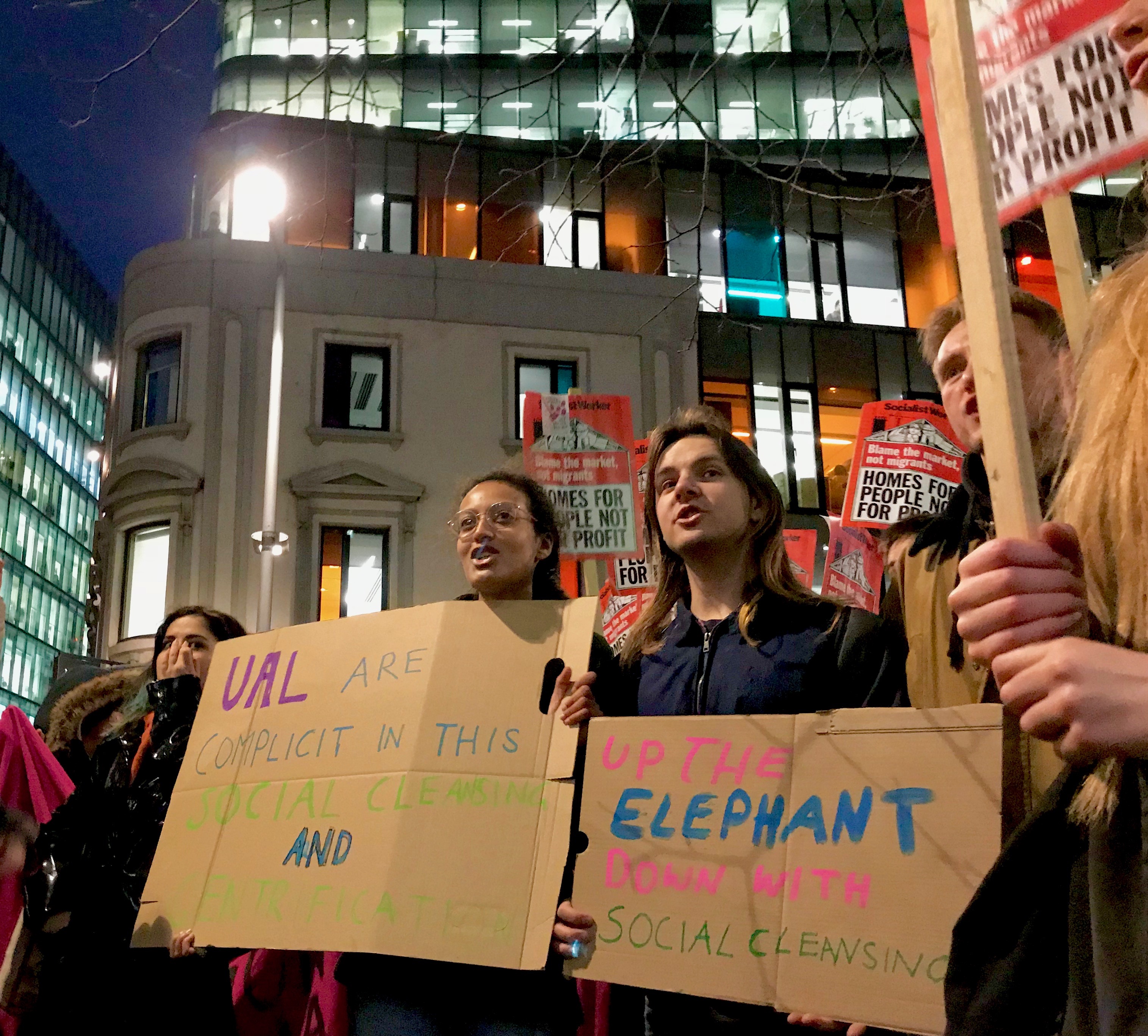